So, it's pretty exciting, now that I've had a few more Etsy sales, to keep adding things to my shop. It's really motivating to actually finish things that I've had lingering on the table, or worse yet, just waiting for pictures. So here the new things are, with more to come this week I hope! 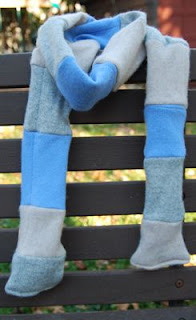 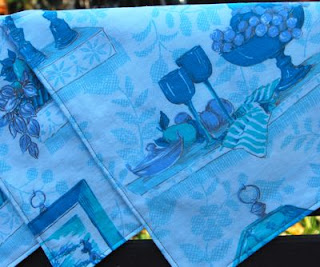 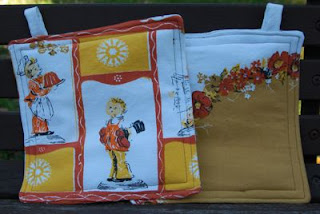 And, because I've done a few test patterns now, I'm getting asked to do more! Which I love. One pattern for a designer who I've done one for in the past, the amazingly talented Patty Young. And the other is another Tweep, Trish, of Two Peas in a Pod. So much fun to test patterns, because it's almost like a challenge, and it makes me what to get right to work as soon as the pattern arrives in the mail (or email as the case may be!) and not come out of my sewing room until it's done.

Thanks for your support everyone! I can't wait to blog about my new pattern tests. Happy Fall!
Posted by Unknown at 4:27 PM 1 comment:

I wish I had some better pictures to go along with this post, but if I wait for pictures, I'd post even less than I do now!

I've had this pattern for a while, and was looking for a reason to make it. Then I got a request for a special order from one of my West Coast cousins for a full length apron for her daughter, and we agreed on this one. I always love an excuse to try a new pattern, and this is the first garment I've made with an Indygo Junction pattern. (Although I have more patterns, just haven't used them yet!) So here's the cover... 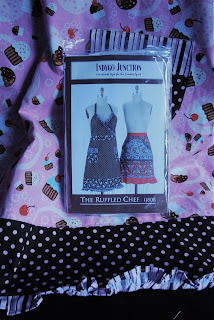 I used some great pink cupcake fabric, along with a stripe and a dot. I had orignally chosen another pink pattern, instead of the stripe, but after starting to assemble the apron, the colors just didn't do it for me.

One challenge I always have is when there are directions and notes on the pattern pieces about numbered sides, or something to that effect. The two triangle tops of this apron had that, and I sewed them on backwards the first time around. The only other thing that I didn't like about the pattern was the width of the ruffle around the neckline. I found it really difficult to get the ruffle to lay the way I wanted it to, and it was almost like trying to sew a bias tape (which usually results in me cursing up a storm).

Other than those two small nits, overall, I think the pattern was very well written. Directions were clear, and easy to follow. Steps were separate enough that I felt like I made real progress, moving from one to the next. OH! And the pattern recommends that you serge most of the edges of the fabric. This made for a really well-finished look to the apron when I was done.

Poor picture and all, here it is. 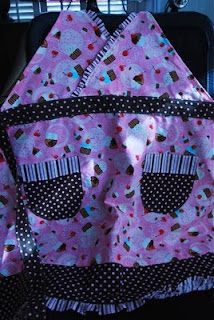 I'm 5'4", and it was actually really long on me, past my knees. So it would be a good apron for someone who is quite a bit taller than me. Also, the ties are really nice and long, so you can either tie it in front, or in back and make a nice size bow. One final note, the pockets ended up feeling nice and substantial. I was afraid that they would feel flimsy, as the seam allowance was small on the bottom, but they were a pleasant surprise when I was done.