Well it's finally finished!  This is what I've been working on for the last 2 weeks.  It's a baby blanket for a co-worker (and neighbor!) who is having her second baby very soon!  She had mentioned to me that she and her husband bought a frog stuffed animal for the baby, and I remembered this great flannel that I had for the back... 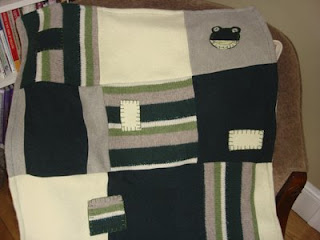 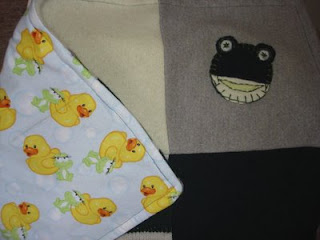 I'm actually at the point where I've made enough blankets that I'm ready to move on to something new!  I've got some ideas all ready and the fabric all purchased.  Now all I need is for my new Pfaff to get here! 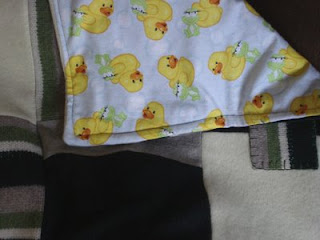 Posted by Unknown at 3:47 PM No comments:

Come on Baby Light my Fire

I've been busy doing a whole bunch of things other than my usual sewing projects for the last few weeks.  I did make a second doggie sweater, but then I was on to a baby hat, and these...some flame pajama pants for my step-son Schuyler.  We had been in JoAnn and he saw the flame fabric and his eyes just lit up "what could we make with THIS?" he said.  So pajama pants it was. 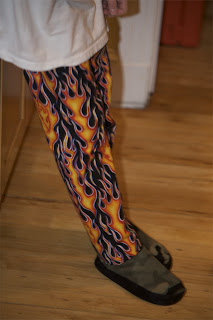 When I went back to buy the fabric, the woman at the cutting counter said "you must have a son, that's the only people who like this!" Pretty funny, but he loves them, so I guess that means they're perfect!
Posted by Unknown at 1:56 PM No comments: