Drunkard's Path - my newest obsession - thanks to SCTMQG

I've been wanting to go a Modern Quilt Guild meeting for what feels like forever.  There are two chapters that are each about an hour away from me.  Last weekend, FINALLY, I had the time on a Saturday when the SCTMQG (Southern CT Modern Quilt Guild) were holding their monthly meeting.

I met a great group of ladies (all ladies, does your MQG have men?) and already have the February meeting time blocked off on my calendar.  I'm really looking forward to some of the programming that's scheduled for this year, but more importantly the motivation to stretch out and try new things...like this month's challenge...the Drunkard's Path.

I was so excited at the meeting that I forgot to trace the templates they had.  So I found one and tried to make my own thin plastic template.  This was my first try at ANY curved piecing.

You can see that my square parts are too narrow and my circle parts are different sizes.  It's a miracle I passed kindergarten, because clearly I can't trace worth a damn, and my trimming is WAY off.  Still, I loved how fun it was.

Someone at the meeting had copies of the paper that had come with their template, so I went right online and bought a set from Baycreek Quilting Products (www.quilttemplates.com).  They arrived in exactly a week, they are nice and thick and as you can see, the proportions are right.

Once I had the templates I dove right into my second attempt, with some precious Cotton + Steel fat quarters that I bought for something just so special.  TAAADAAA!

I'm not sure if it was the sturdiness of the templates, that I had some practice with the first set, or what else, but as you can see, this block turned out MUCH better.  And much more precisely lined up.

Once I got going, I had to try a second one, and I used some of the scraps left over from my most recent finish, my Darling Quilt by Freckled Whimsy, my precious Heather Ross Briar Rose leftovers.

What I love most about the Drunkard's Path blocks is that they intimidated the hell out of me, and now I feel like I can try some of the awesome layouts on this link that was shared with me...

What's the quilting technique that intimidates you most?

Posted by Unknown at 7:19 PM No comments:

MTB T-shirt Quilt - So good it's hanging in bike heaven

When my husband saw the first one I did, he said "I want one of those".  When he saw the one I made for my son, he started making a pile of shirts and said "the only thing I want for Christmas from you is a mountain bike shirt quilt".  Of course, with that kind of a request, I had to make it.

He originally wanted it to actually use, but when he saw it all finished, he was afraid it would end up with dog hair on it, and it wouldn't get the respect it deserved, so he changed his mind and hung it in his bike workshop.

He chose the most spectacular flannel for the back (when he thought that's what would be touching him).  It's Northcott Man About Town flannel, and it is gorgeous.  Soft, thick, but so easy to work with.  The binding almost seemed to attach itself.

I used a thicker interfacing with his because the t-shirts were all over the place in terms of age and use.  Some had been washed a ton of times and some he bought (yes, he did) just for this quilt.  So the thickness and texture was really inconsistent.  But with the interfacing, they became much more similar and easier to get to line up.  It also made the finished product look much more substantial to me.


As much as I love giving these as gifts, and I know how much they mean to people, t-shirt quilts are pretty boring to make.  Not that I've got my techniques down, they do come together quickly.
Posted by Unknown at 8:40 PM No comments:

Last year, Economy Blocks were everywhere.  They were filling my Instagram feed, they were in blog posts and Twitter.  Like everyone else, I went to Rita Hodge's Red Pepper Quilts blog and used her great tutorial from August of 2013 to start making blocks.

I didn't have a ton of experience with fussy cutting so this was a learning experience for me.  I loved that I could save (and use!) the tiniest scraps of my favorite fabrics to make these quick and easy blocks.

These are four of the ones I have done.

One thing I realized after I got a bunch made was that I was all over the place with the colors.  I have no idea if these will make it into a quilt or not.  They might be too wild all together.


I do have a thing for orange. Light, dark, polka dots.  I love all things orange.

More tiny scraps of Mendocino and some of my favorite old Yummy Goods swirly thingys.

This is one of my Bari J. blocks.  It's a mixture of three of her lines I think.  Look at that bird!! I actually got him right into the center.


So all together, these four look great.  But wait until you see them next to my experiments with orange and blue.  Yikes! 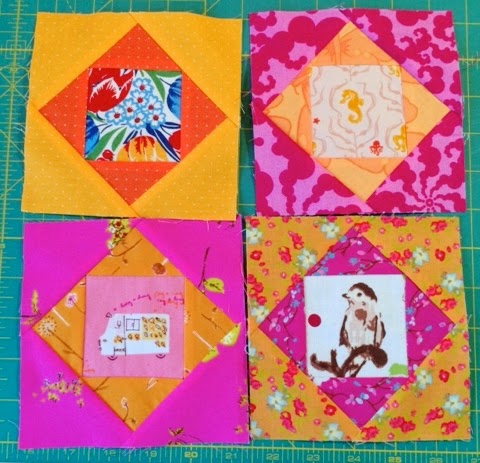 Have you made an Economy Block quilt?  Was it lots of mixed colors or a specific palatte?
Posted by Unknown at 9:22 AM No comments:

Aviatrix Medallion is a pattern by Elizabeth Hartman.

I loved this pattern from the moment I laid eyes on it.  The rainbow color spoke to the 80"s child in me and said "you NEED to make this rainbow quilt".  When I saw that they had a kit and Quilt-a-long at my local quilt shop (Sew Inspired in Simsbury, CT) I went and bought one right away.  It's just piecing I told myself...yeah, a LOT of piecing, but I can do that.  Maybe. Not so much.

UGH.  Thank GOD for the first class...The instructor went over the cutting for the center piece in great detail, noting that although you got a fat quarter for each color, which is what the pattern called for, you needed a FULL, EXACT fat quarter.  If it was a hair short or crooked, you had to get clever with your cutting.

I tried to take a lot of pictures as I went along.  The diamonds were much harder to line up than I thought...and every single one of the eight had to be ripped out at least once.  I used the templates in the pattern.  My cutting techniques and precision need improvement.


Much pulling and creative pressing ensued.


This project has been a lesson in patience.  And also, in taming my perfectionist shrew.  I only tore the center out once, and I am honestly really happy with how the points came together in the very center.

I absolutely love the grey fabric that was included in my kit. It's got this amazing texture, it's not a quilting cotton.  I'll have to ask exactly what it is next time I'm at the shop.


It was so much fun to put the first colored border on.  It really started to feel like the rainbow explosion I was looking for.

Although the fourth border was a great deal of piecing, it was also sort of addictive.  I wanted to actually see the blocks finished, and I was chain piecing a lot of it, so I didn't get to see what they looked like until the end of the month.

As my Aunt Pat says, "the pattern is beginning to emerge".    It's so big now, I have to take it outside to get good pictures.  It was very grey the day I took these.

This is a close up of the grey ("neutral") squares for Border #5.  When you sew them on, they're rectangles, and I was sort of surprised they actually came out like the pattern said they would.

I went to the class today as a drop in.  They went over the next two borders.  The final border set is the butterflies, which will challenge my ability to do angles again.  They are also TONS of piecing, wish me luck in keeping up!

At the end, I'll try to include some pictures of the other color/fabric options people in class chose.  They are all spectacular.
Posted by Unknown at 5:10 PM No comments:

This is my final finish for 2014.  My second "big" quilt.  It's 80" x 80".  I made it for my daughter's bed.  Up until Christmas Day, she was sleeping in a full sized bed, but it took me so long to finish this one, that she changed her mind and got twin bunk beds!

I bought a fat quarter set of Heather Ross' Briar Rose line as soon as it came out and I was looking for just the right pattern.  This is "Darling" by Freckled Whimsy.  I got everything at Fat Quarter Shop.

One of the things I love about the pattern is that is shows off the prints.  The blocks are big, so you can really see all of the cute detail. (Some close ups below)  My daughter chose some multi-colored Michael Miller Candy Dots for the binding. 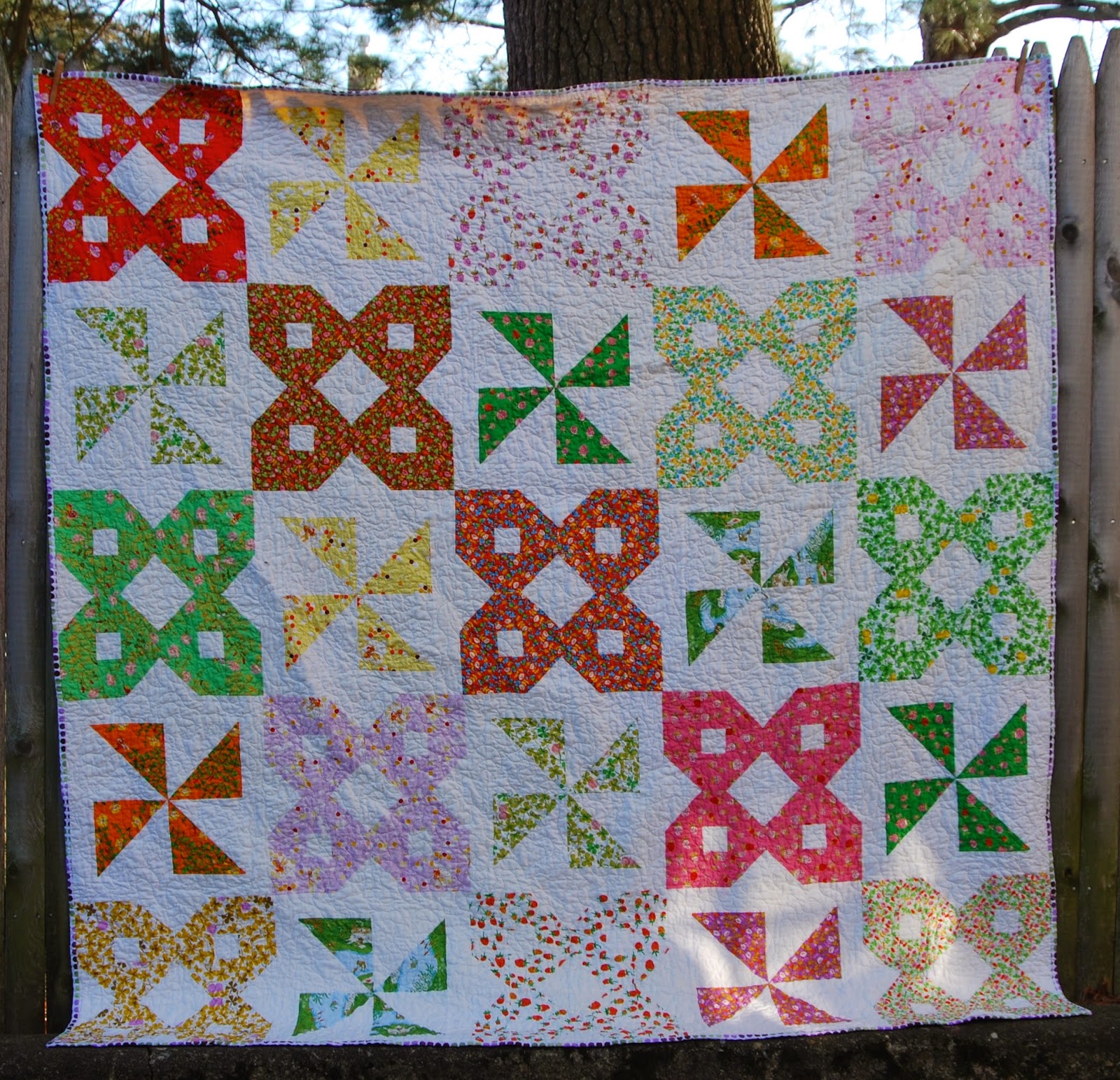 My Aunt Tala did the quilting on this one too, as usual, it's spectacular.  It looks like there's hearts all over the quilt.

This yellow is one of the bolts I got for backings when our local Joann closed.  I got a bunch of DS Quilts bolts for $4/yard.


One of my goals for 2015 is to learn to take better pictures.  The prints are so adorable, and these pictures don't do them justice.


I also finished a T-shirt quilt for my husband, and a lap quilt for my mother-in-law.  Do you think I have good pictures of either of those?

For 2015, my goals are a quilt a month, to use at least 75% of the fabric for every quilt from my stash (which is VERY doable) and to finish at least 2 more long standing UFOs.  Oh, and of course to blog about them all, with really good pictures.